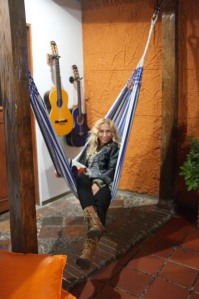 I have noticed a very interesting thing. Whenever I take a taxi, buy fruits, go to the terminal or do other quotidian things, people do not ask me IF I live in Colombia, but FOR HOW long I have been living here. First I thought it was a one-off joke, but then I kept getting the same question over and over again.

It made me laugh, and I started to build a fake reality around it. So first I started to invent stories: sometimes I would say I came here for holidays four month ago and stayed, sometimes I say that I am studying here (which is closest to the reality, and even possible to be true!!), sometimes that I work here, or looking for a job. Occasionally I say I am half Colombian, from Polish mother and Colombian father, and I came back here to lear about my roots. The funnies thing is that they all believe me, and sometimes it end is long and passionate conversations about my (fake) identity!!!

But it is true that having spent some time here (and it’s my fourth time in Colombia), I have slowly start to learn this country, recognize some typical aspects of it and sloooowly melt into this reality. It doesn’t come too difficult, if you keep in mind how much I love this place. So when I go somewhere, I usually know where I’m going and how to get there, I don’t look too confused and my communication skills reached some more or less decent level. I am frequently asked how I have learnt Spanish, to which I usually respond that I didn’t noticed when it happened. Sometimes I admit I learnt with friends (although it’s worth mentioning here that one of my best friends, who is Colombian, have persistently been refusing to speak Spanish to me for past eight years. Whenever I speak Spanish to him – he always responds in English. And we can have long and sophisticated conversations this way). I also learnt enough about the reality here, that I don’t let anyone treat me with a ‘gringo’ prices. Whoever tries to do this (although it hardly never happens, only in touristic corners in the coast), I laugh it out and quickly make them understand I’m not gonna fish that trick.

I have my Colombian mobile number and huge network of contacts. I know wayyyyyy more people here than in my own country!!! And many influential ones. Whenever I leave Colombia- I miss it, I am getting a Colombia-home-sickness.

Some time ago I thought about making my fake identity more legitimized, and I checked the procedure of applying for Colombian passport (speaking about this – I highly recommend a great documentary by Brasilian filmmaker Sandra Kogut, called ‘Hungarian passport’. It tells the story of the filmmaker herself, applying for Hungarian passport, supposingly based of the fact that one of her grandparents was Hungarian. Excellent piece of cinema!) For some reason I never thought about applying for a british one, having lived in the UK for over eight years now, although I have all rights to do it and it would be a mere formality. I never felt I a slightest need of it.

Some of my friends in London like to joke that I am fake Colombian. It looks like my fake Colombian identity gets more stable each day! 😉